The rising popularity of Instagram with constant modifications helped it become one of the most important social media platforms. The introduction of Instagram stories and highlights gave rise to Instagram vloggers. Talented and enthusiastic people took advantage of the easy video sharing platform to share vlogs on personal or professional affairs.

Do you want the world to witness your outstanding skills or know your life story? Becoming an Instagram vlogger might be the answer. Since Instagram is mostly based on visually engaging the audience, making videos to attract followers is your best bet. Hence we will discover the secrets to vlogging by looking at some of the most sensational Instagram icons. 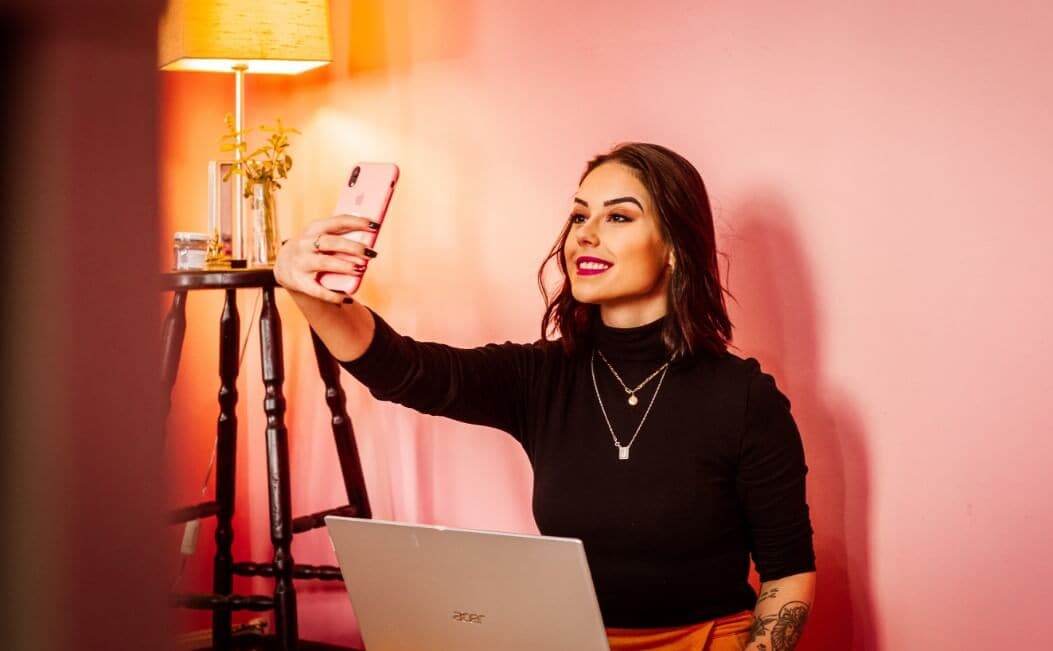 The strength and power of Instagram vlogs are made apparent by the rapid increase in Instagram influencers' number and fame. Inspiring and motivating the audience by sharing their experiences regarding personal struggles and skills or business products, these influencers have resulted in impacting a vast majority of people globally.

Looking at the big picture, regularly witnessing a product, place, or business being talked about and the pros and cons discussed in detail, we become more confident in deciding whether to try or visit the said topic or place. Hence, efficient marketing can be carried out with the help of Instagram influencers. 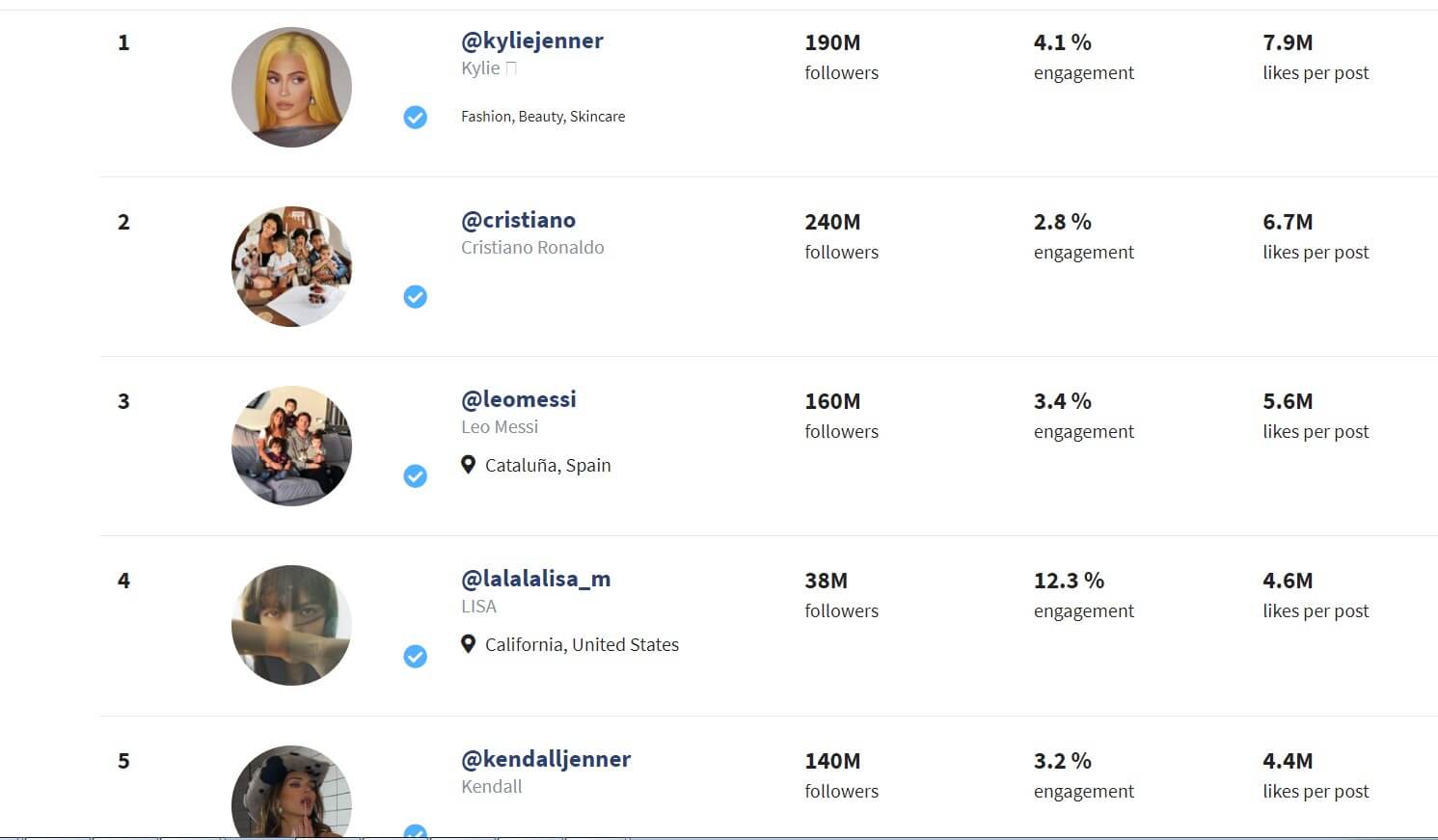 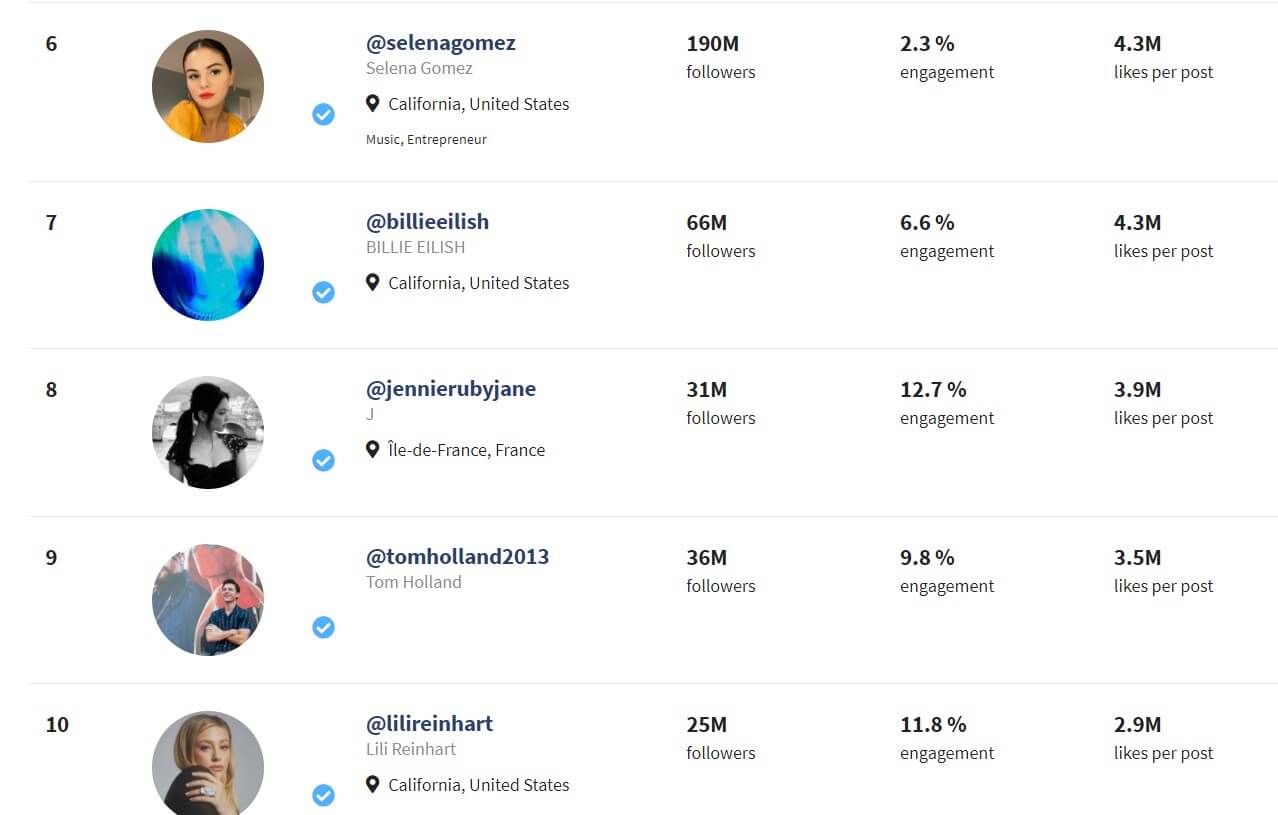 An American model and entrepreneur with over 190 million followers, this young businesswoman has been termed as one of the most influential Instagram influencers. As the founder of 'Kylie Cosmetics,' she earned the honor of becoming the youngest self-made billionaire.

The Instagram queen majorly markets and demonstrates the use of her products in fashion, beauty, and skincare, however, she also engages in sponsorships and, by sharing one sponsored post, earns around one million dollars. Her socialite status and fame get her an average of 6.7 million likes on her posts.

Cristiano Ronaldo, the famous soccer star, has a 240+ million fan following on Instagram and is one of the most highly paid influencers. Every post shared by Cristiano's Instagram account is reported to make $97500 on an average.

The legendary footballer shares sponsored posts or promote products by 'Nike' and 'Clear Haircare' as part of paid partnerships. Cristiano's phenomenal reach owing to his football stardom has made him the most marketable athlete of the century. Moreover, the star's interest in philanthropic activities is also evident in his Instagram posts, which attracts the audience outside the sports world, further increasing his fan following.

With over 160 million followers, Lionel Messi is one of the greatest footballers and most powerful Instagram influencers of all time. Second, only to Ronaldo, the Barcelona star earns up to $23.3 million from his posts annually.

The soccer legend is mostly involved in doing paid partnerships for leading brands such as Adidas, Pepsi, and Gatorade. Besides, he also engages in paid promotions for 'The Messi Store,' a sports lifestyle brand based on him. Being a family-oriented person, he tends to share countless posts highlighting his family life. Apart from that, he also earned his place as a top Instagram influencer through his philanthropic activities, winning over people worldwide. 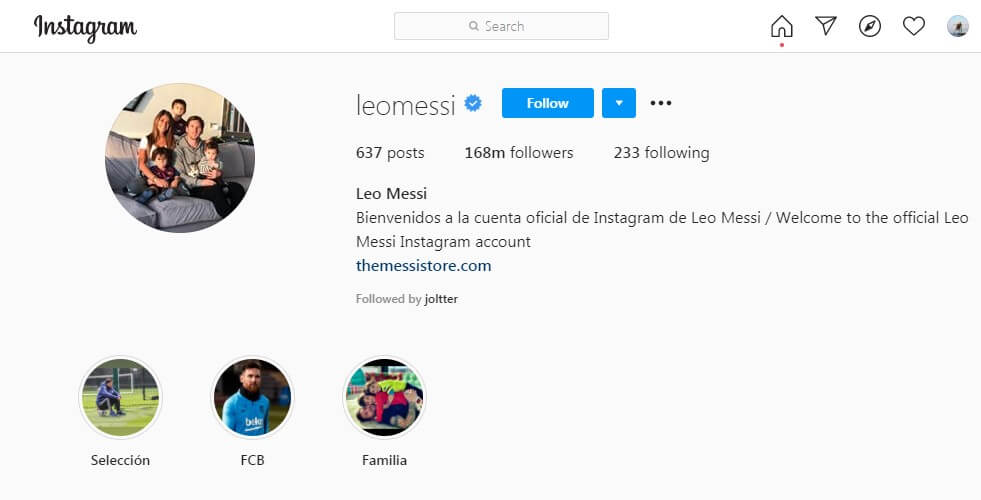 Lisa, formerly known as Pranpriya Manoban, is a Thai singer, dancer rapper and a model. She is also the brand-ambassador to a leading cosmetic brand 'Moonshot,' based in

South Korea. Apart from this, her interest in k-pop music and as a member of the all-girls group 'BLACKPINK,' she quickly rose to the top Instagram influencers list in no time.

Despite her comparatively small fan base, she outshines Kendall Jenner by receiving almost 4.6 million likes per post. Adding to the list, she also stars as a model for the famous French luxury brand 'Celine.' Furthermore, she successfully landed as the brand-ambassador of another luxury brand 'Bulgari' adding to her ever-increasing stardom. 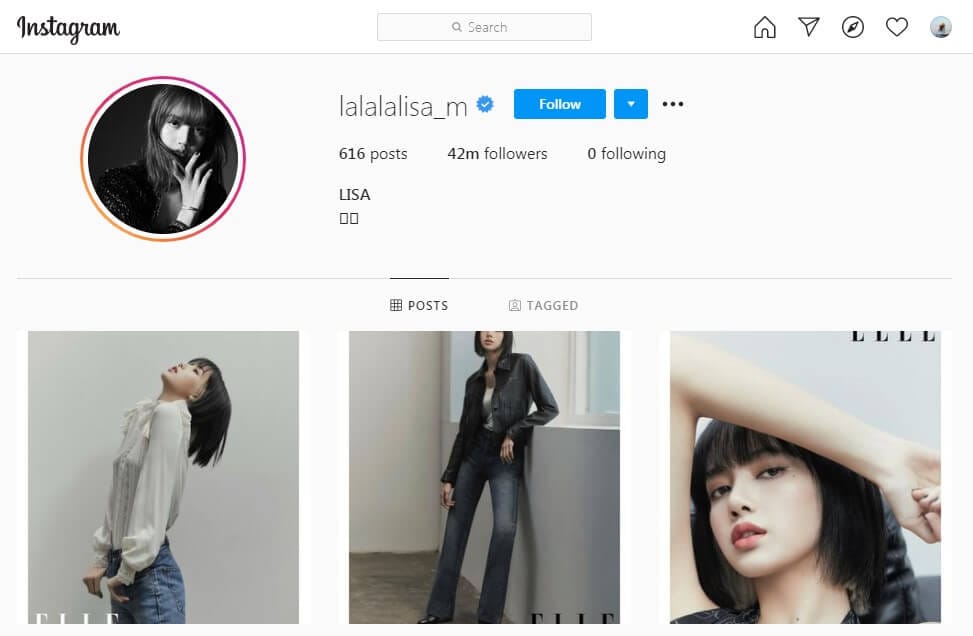 One of the key stars on 'Keeping Up With The Kardashians,' Jenner is ranked among the best and highly influential Instagram influencers with a fan following of around 140 million. She rose to fame through modeling at a young age and soon modeled for high-fashion designers. She has been regarded as the world's highest-paid model by Forbes. Furthermore, Jenner's single paid post on Instagram is believed to earn around $611,000.

Owing to her incredible fanbase, many top-notch brands such as Burberry and Calvin Klein invested in her influential personality to increase their sales through Instagram posts. Also, she has featured on the covers of LOVE and Vogue magazines.

Inspiring people with her sensational singing and acting skills, Selena has earned a staggering 190 million fan following. The American multi-talented young star has sold more than 7 million albums and 22 million singles worldwide, as reported by Billboard in 2017. She also had the highest fan following until Ronaldo succeeded and topped the Instagram influencer's list.

Despite her extraordinarily huge fanbase, the young star believes in keeping it real and keeps paid promotions to a minimum. Nonetheless, she collaborated with major brands like Coca Cola and Puma to work her influencer magic to boost up their sales. Gomez also founded the beauty brand 'Rare Beauty,' which she promotes through her pictures and videos on Instagram. 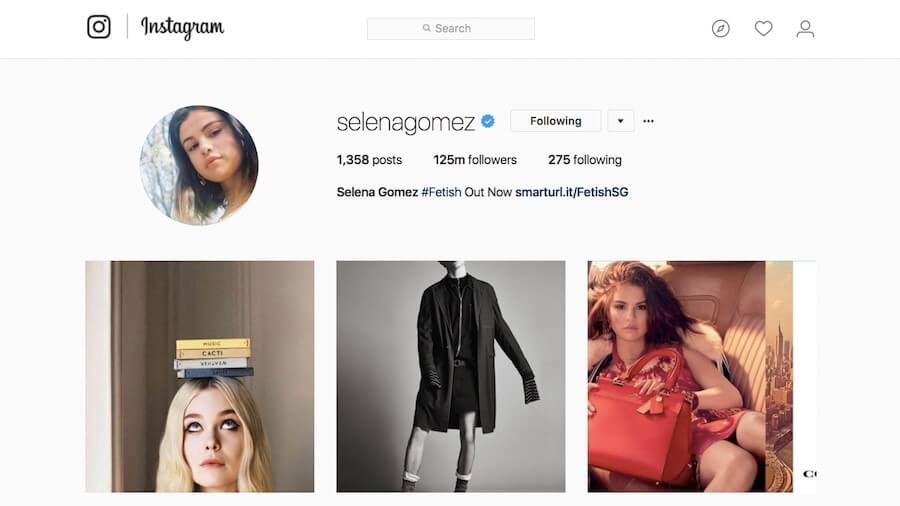 The American songwriter and singer, Billie, is the youngest Grammy's award winner. In March 2019, her most famous album 'When We All Fall Asleep, Where Do We Go?', was released and 6 of the album's songs ended up in Billboards Top 100 songs list.

Most of her fan following is the result of a mixture of her unique attire choice and her otherworldly singing capability. Even though she has a relatively small fandom, she still ranks high in the list of Instagram celebrities with around 4.3 million likes per post, the same as the highly prominent Selena Gomez. However, the famed singer does not engage in many paid promotions. Instead, she uses her Instagram profile to promote her music. Nevertheless, she is reported to be paid $25 million for a documentary of her extraordinary journey through life by Apple. Jennie Kim, the Korean singer, and rapper rapidly climbed the ladder of success and fame after becoming a member of the famous girl group 'BLACKPINK.' Besides, she also debuted her first solo music video 'Solo' that went on Billboard's World Digital Songs list and was also featured in New York Time's playlist

Kim, known for her luxurious, trendy, and elegant image, was chosen to be the new model for Chanel in 2018. Apart from Chanel, her Instagram features her promoting many major brands like Calvin Klein, Marie Claire, and Hera. Despite having as low as 31 million followers, she is one of the top Instagram influencers in 2020. 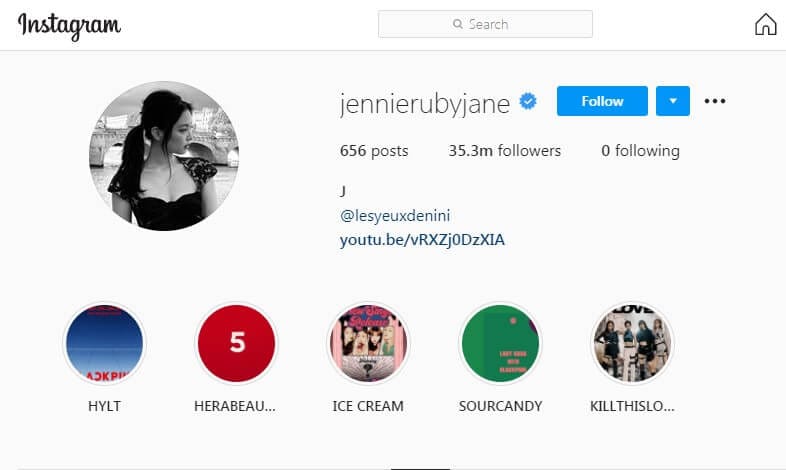 The young English actor entered the hall of fame by starring in some of the significant Marvel's movies, the most famous being Spider-Man and Avengers. Although he only has 36 million followers, his engagement rate is a massive 9.8%, which is more than that of many at the top of the Instagram influencers list.

Tom majorly uses his Instagram profile to highlight his personal and professional life devoid of any sponsored posts. He utilizes his influential position to inspire his followers by sharing his personal experiences and daily engagements. The raw, behind the scene posts of Tom, attract followers and further his stardom. 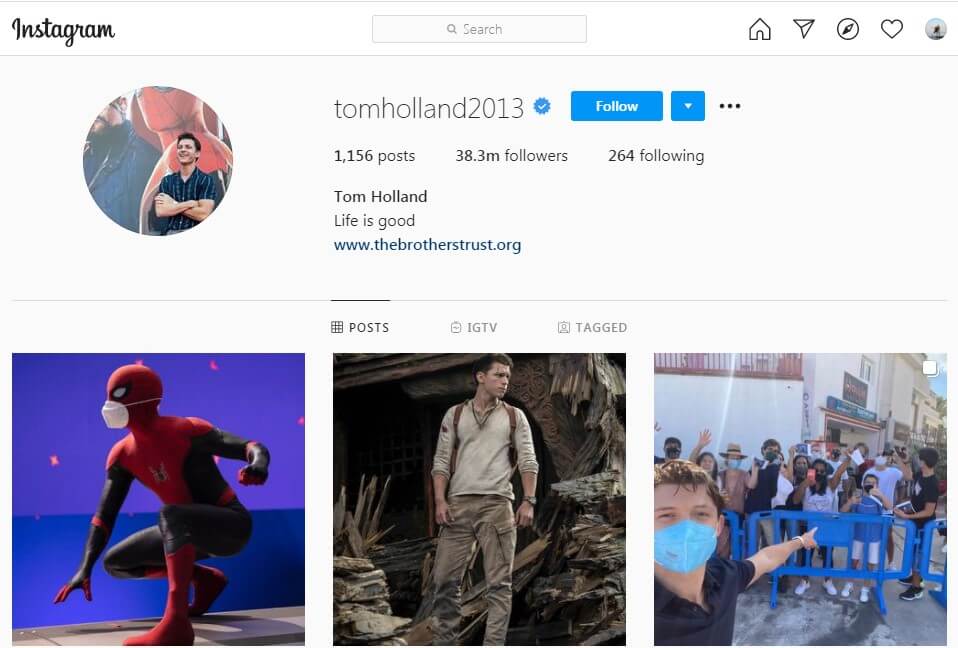 The young actress rose to fame by starring in the box office hit 'Hustlers.' She then went on to become the beloved 'Riverdale' star, reaching higher with every step she took. Lili became a perfect example of beauty with brains when she wrote her poetry book 'Swimming Lessons.'

Lili's captivating beauty landed her as the ambassador for CoverGirl. Besides, she also ended up on the covers of some top-notch magazines, namely Glamour, Allure, and Flaunt. Even with relatively least numbers of followers, she is at the top of her career and amongst the top Instagram influencers. 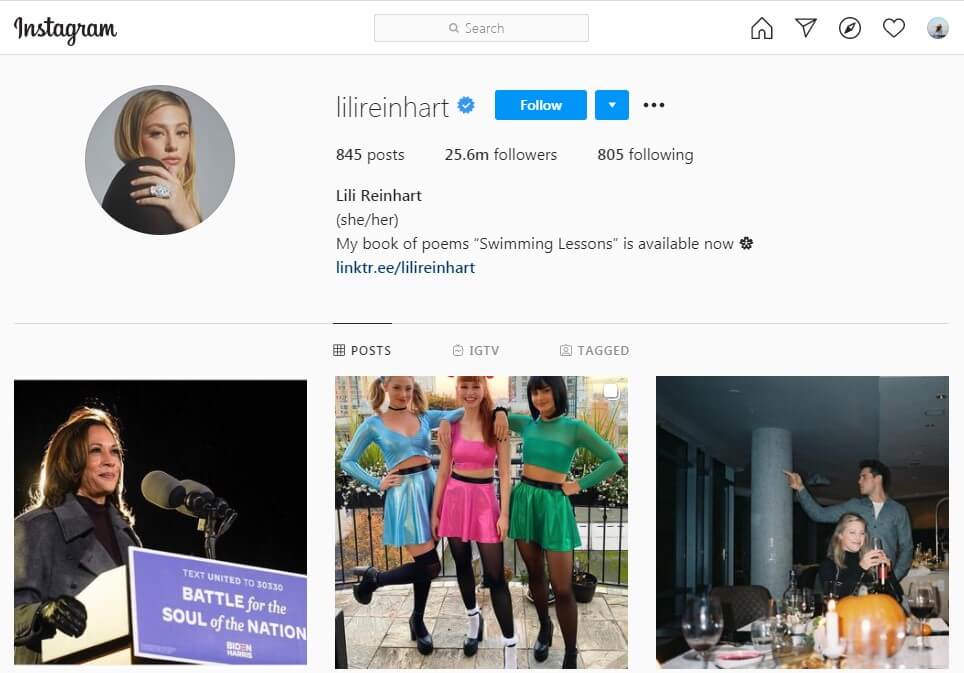 Initially, Instagram served as a platform for showcasing or sharing personal and professional lives and connect with people globally. However, with time, it became a significant marketing platform with the help of Instagram influencers who made use of their huge fan following to promote different brands.

Therefore we can now use Instagram for entertainment as well as business ventures and earn fame and money at the same time. Follow these top Instagram influencers to learn the recipe to success and create your fandom. So, are you ready to become an Instagram influencer?

How to Unblock Someone on Facebook on Your iPhone or PC

How to Make a Slideshow on TikTok: An Ultimate Guide